An Insight of Augmented Reality 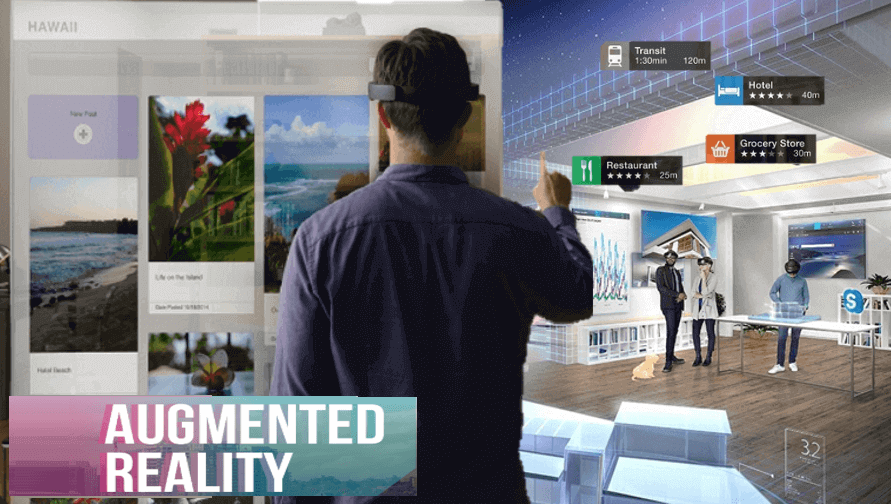 'Augmented Reality' an enhanced version of reality created by the use of technology to overlay digital information on an image of something being viewed through a device view of real life by overlaying computer-generated content. In other word, it enhances the current environment, creating a mixed reality instead of replacing that reality. Augmented reality is continually growing with new technology advancements, software improvements, and products.

Furthermore, AR has always shown exciting signs of potential, some common applications of AR technology include video games, television, and personal navigation, and can be displayed on various devices: Screens, glasses, handheld devices, mobile phones, head-mounted displays. Other than these examples Sound and Touch feedback can be included in an AR system as well as through non-visual methods and devices.

Let's take a look into the different types of Augmented Reality:

Marker-less is one of the most widely used and implemented type of technology uses a GPS, digital compass, velocity meter, or accelerometer which is embedded in the device to provide data based on your location. It is also called (location-based or position-based) augmented reality allows you to try different combinations of objects, styles and location. Have you ever thought or imagine that an AR application can virtually place furniture inside your living room. Marker-less provide wide availability of smartphones and location detection. The two most important difference are:

Marker-Based also called Image Recognition or Recognition based AR. This technology uses the camera in AR device to produce a result and also useful in education as it can help students to bring their imagination turned into reality.

The marker-based AR technology is having the following uses:

This technology is very interesting as it is based on AR projection function, where lights from the device projected on the objects. The most exciting implementation of projection-based AR is perhaps the most exciting one of all uses.

Example: Did you ever think those lines on your fingers (which divide each finger into three parts) can create 12 buttons? Through projection-based AR device When the light of the calculator is thrown on your palm the 12 partitions in your hand will become 12 buttons and a user can touch these buttons and can interact with them.

Various uses of this technology are as follows:

Let's explore the potential of augmented reality in the real-world.

Much emphasis is placed on visual stimulation in various industries, and health care is no different. In pharmaceutical companies AR allows better patient education by seeing various complex products. No matter how old the patient helps in engaging and educating the audience.

The augmented reality in medicine can help close the learning gap that can cause safety problems and clearly shows how to take a drug while enhancing the benefits of the product in a visible way.

An example of this is how Pfizer AR is used by Blippar. Consumers can learn how ThermaCare works and use the Tracing Tool to learn more about product options that were suitable to relieve their stiffness and pain.

This AR may simply help practitioners comprehend the best ways to manage a new treatment or show it in AR how a specific procedure must be performed.

A recent example allows medical students to interact in an intuitive way with a 3-dimensional representation of the body. The extent to which AR will be able to support & educate health care professionals will continue to push the frontier where technicians and the pharmaceutical industry collaborate more.

One of the greatest advantages of AR is the ability to demonstrate and visualize complex concepts clearly. For competing sales representatives to the doctor’s attention, their ability to quickly demonstrate new drug benefits through AR can be very helpful. For example, imaging a three-dimensional device on the doctor’s office and showing the effect of the drug in question has a greater effect than the effect on the flat image. Healthcare professionals can scan the page to see the effects of the situation in 3D, see how the treatment works, and see potential cost savings and more.

Industrial IoT. Augmented reality and the industrial Internet of Things (IIOT) will most likely be the first to converge. AR device adoption is happening in the enterprise space at a faster pace than the consumer space (with the exception of Pokémon Go). And similar to how consumer connectivity created value with the smartphone, enterprise connectivity will provide an information layer that’s expected to extend the value of AR devices.

The AR industry continues to push the boundaries of technology and with the right innovative partners, we expect to see many of the most interesting AR cases that will transform the industry to the best. Augmented Reality has gone through tremendous changes. All mobile application development companies have been given a new dimension to bridging the gap between imagination and reality. Hundreds and thousands of AR applications are currently in use and are in the process of development.