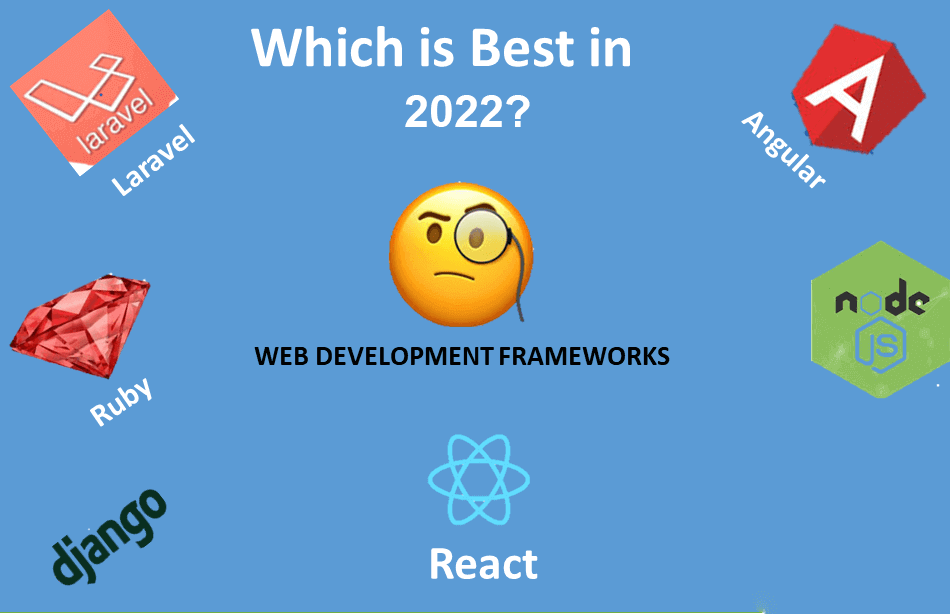 As the standards of web applications are always rising, frameworks have become an essential part of web development. Let’s walk you through the world of web development and is constantly changing, and it’s very easy to understand in which direction these changes are moving.

Angular is a frontend and JavaScript open-source framework that was designed especially for single-page web applications using MVC architectural layout. Angular was developed by Google, and Microsoft, and PayPal. It’s a best choice for the business because of its very rich framework able to build complete client-side applications. In addition to that it provides the amazing combination of a low entry threshold and a rich feature set standard library, users have written a lot of extensions for it. Angular supports Ajax, DOM structure management, animation, patterns, routing, and other features. The powerful framework and its rich functionality are finding uses in more and more web applications.

React was basically the first to adopt the component-based architecture that was adopted by many other frameworks. React is a frontend library, and not a framework. It was often considered by developers as a framework and usually compared in that context. React’s virtual dom makes the dom manipulation much faster and it’s quite easy to pick up, particularly as a result of its JSX syntax.

Bootstrap has gained huge popularity because of the undisputed leader among the available front-end frameworks today. It is an open-source JavaScript framework and a combination of HTML, CSS, and JavaScript code made to help build user interface components. The most popular HTML, CSS, and JS framework for bootstrap is developing responsive mobile first projects on the web. To build a responsive mobile website from scratch, the Bootstrap framework is an excellent choice for a few reasons:

Laravel is a Model-View-Controller framework and web application framework. It is a full-stack solution for both back-end and front-end developers as it is relatively young as compared to other frameworks with this listing. It is used in caching, working with file storage, working with various databases. There no doubt while learning Laravel you will never lag behind in the world of web development and has proved itself the master of back-end framework by constantly being improved, keeping up with modern trends.

Ruby on Rails (RoR) is a Model-View-Controller framework and regarded as one of the favourite frameworks for web developers. Many large brands like Hulu, Airbnb, GitHub use this framework. Rail is a full-fledged, multi-level framework with the speed of development and designed to build web applications using databases, and is based on MVC architecture.

Node.js is over a mere framework and decidedly the best when you’re seeking to construct a lightweight, yet highly effective website. It has the ability to ensure scalability and quick network applications since they are capable of dealing with a number of applications at the same time without compromising on performance.

Each framework has its own strengths and weaknesses, and specific areas of application, allowing you to decide the wants of a particular project. For example, if your project is simple, there’s no need to use a complex framework. Also, many of the options are modular, allowing you to use only the components you need, or even mix components from different front-end frameworks.